The human brain is amazing, weighing just about 3 pounds  [1’4 kilograms] it is the most complex part of the human system and one of the most complex objects in the known Universe..  A big thing about the brain is its connectivity abilities, its essentially a network of over 100 billion [wow!] individual nerve cells interconnected in systems that join up and construct our reality. Recent advances in brain imaging techniques is revealing lots about our brains neural circuits, we can confidently point to regions of the brain associated with particular modes of thinking and feeling.  Our brains constantly manage multiple streams of information from our internal and external environments to ensure we get the physical, social and emotional nourishment [as directed by our innate templates] needed for us to survive, maintain ourselves and grow.  Our creative thoughts, feelings, and plans are developed by the our brains complex systems of connectivity. It processes our  feelings and thoughts, stores and retrieves our memories, fixes our attention and controls the drivers of our behaviours. It took millions of years for our human brains to evolve to the point where we have the knowledge to direct our own development.  Yet, not all our perceptions are conscious ones,  a lot of our behaviour is influenced by unconscious processes including many motivations that make us behave in certain ways. The information in this article combined with other articles on this site, provide insights into the mental processes involved in human perception. learning, memory and behaviours – the essence of you!

A cautionary note, although this article specifically focuses on the brain, it is important to understand that the brain/body system is the more holistic view of human functioning which exerts its own individual influences on our lives, such as our experiences of pain and pleasure and our success, or not,  at social connections. Empirical evidence about the minds influence on our physical and mental health and disease processes is widely available.  Research into the brain-body systems [sometimes referred to as the embodied mind] is gaining momentum and is likely to improve our understanding about the nature of consciousness and our perceptions of self in space and time [big stuff]. We will provide information elsewhere on this site about specific brain body effects that are supported with empirical and scientific explanations.

The brains neuroplasticity – Movement, language, perception, thought, memory, are all made possible by the serial and parallel interlinking of several brain regions each with their specific functions. We know that damage [such as what happens in brain trauma through strokes or accidents] to a single area of the brain does not always result in the complete loss of an entire faculty. Even if a behaviour initially disappears, there may be a a complete or partial return as undamaged areas of the brain reorganise their linkages – this is known as the brains neuroplasticity.   This is an important concept in understanding the brains potential for retuning itself to meet your needs.

There are a number of ways to describe the architecture of the brain in terms of its form and functions, in this article we will consider its different regions, its most basic units of function and the current thinking about how the human brain has evolved and link this to how we behave. A common approach is to classify the brain anatomically based on the embryonic development of 3 regions: the forebrain, midbrain and hindbrain. All these regions work together as one brain, but each part also has its specialist properties.

Brain Cells – Before exploring the different regions of the brain, it is important to understand the cells and tissues that are the building blocks of them all. Brain cells are different from other cells of the body. There are two main types : neurons and glial cells. Although the brain has many other types of cells, these are the ones most involved in learning.  A neuron has three basic parts: the cell body, the dendrites, and the axon. Information enters the cell body through dendrites, which are really constantly moving appendages seeking information. If the neuron needs to send a message to another neuron, the message is sent through the axon. There is no direct physical contact between communicating neurons. The message has to go from the axon of the sending neuron to the dendrite of the receiving neuron by “swimming” through a space called the synapse. When the signal reaches the end of the axon it stimulates the release of tiny sacs called vesicles that release chemicals known as neurotransmitters  into the synapse. Neurotransmitters are chemical messengers which relay, amplify and modulate signals between neurons and other cells. The two most common neurotransmitters in the brain are the amino acids glutamate and GABA.  Other important neurotransmitters include acetylcholine, dopamine, adrenaline, histamine, serotonin and melatonin.   The electro-chemical signal released by a particular neurotransmitter may encourage the receiving cell to fire, or inhibit or prevent it from firing. Excitatory neurotransmitters include: acetylcholine, glutamate, aspartate, noradrenaline and  histamine.  Inhibitory  neurotransmitters include GABA, glycine and serotonin  while dopamine may be either. The neurotransmitters cross the synapse and attach to receptors on the neighbouring cell. These receptors can change the properties of the receiving cell,  they cause changes in the permeability of the cell membrane to specific ions, opening up special channels which let in a flood of charged particles (ions of calcium, sodium, potassium and chloride). This affects the potential charge of the receiving neuron, starting up a new electrical signal in the receiving neuron. The whole process takes less than one five-hundredth of a second [another WOW!]. The interactions of neurons is both electrical and electro-chemical, a message within the brain is converted, as it moves from one neuron to another, from an electrical signal to a chemical signal and back again. It is possible for each individual neuron to form thousands of links with other neurons – a typical brain has up to  1000 trillion synapses. Functionally related neurons connect to each other to form neural networks. The connections between neurons are not static and change over time. The more signals sent between two neurons, the stronger the connection grows (the amplitude of the post-synaptic neuron’s response increases), and so, with each new experience and each remembered event or fact, the brain slightly re-wires its physical structure. As the neurons make connections, the brain is growing dendrites and strengthening the synapses. The phrase “neurons that fire together wire together” is often used to explain this phenomenon.

The biggest,  and most uniquely human part of the brain is the forebrain, which contains a number of important structures and sub regions including the cerebrum., the limbic system. and the hypothalamus.

In our human brains the cerebrum is king. Here lies our control centre for higher level brain functions such as logic, reasoning, language and creativity.  The outer surface of the cerebrum is about  3 millimetres thick and a great design feature is its highly folded layer of grey matter known as the cerebral cortex.   The cerebral cortex is our electrical power station consisting of closely packed neurons that control most of our body functions, including the not yet fully understood state of consciousness, our senses, the body’s motor skills, reasoning and language. The convoluted folds of the cerebral cortex is natures way of fitting a large cortical surface area into the confines of our skulls. Unfolded the cerebral cortex would extend to measure over 2 square metres.  The bulges of cortex are called gyri (singular: gyrus) while the indentations are called sulci (singular: sulcus). The cerebral cortex is the processing unit of the cerebrum, it controls perceptions and other higher level cognitive functions such as our ability to reason, to concentrate and to think in abstract forms. A deep furrow known as the longitudinal fissure runs down the centre of the cerebrum, dividing it into the left and right hemispheres.  A band of white matter called the corpus callosum connects the left and right hemispheres of the cerebrum and allows the hemispheres to communicate with each other. Each hemisphere is further divided into 4 lobes: frontal, parietal, temporal, and occipital named in relation to the skull bones that cover them. The specialisations and connections associated with these 4 lobes could be considered in some part to represent the architectural structures of our thoughts and feelings. The cerebrum is positioned over and around most other brain structures, and its four lobes with their specialised functions are intensively connected.

The limbic system [our emotional brain] is another deep grey matter region of the forebrain, containing the amygdala and hippocampus which are involved in memory, survival, and emotions.  If the cerebrum is King of our thinking and cognitive abilities then our limbic system can be thought of as Queen Bee of our emotional intelligence.  The limbic system triggers the bodies response to emergency and highly emotional situations with fast, almost involuntary actions.  Parts of the limbic system also lie in the thalamus and the hypothalamus. 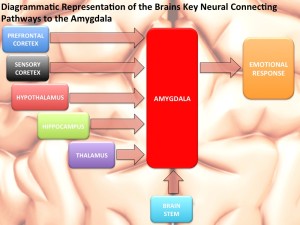 Diagrammatic Representation of the brains key neural connecting pathway to the amygdala.  CLICK TO ENLARGE

The Midbrain is the region of the brain lying between the hindbrain and the forebrain. It helps us to locate events in space and is involved in the control of some reflex actions.  It forms part of the circuit involved in the control of eye movements and other voluntary movements. It also contains a system of neurones that releases the neurotransmitter dopamine. The reticular formation runs through the hindbrain and the midbrain and is involved in sleep and wakefulness, pain perception, breathing, and muscle reflexes.

The Hindbrain is composed of the medulla, the pons, and a wrinkled ball of tissue called the cerebellum. The medulla lies next to the spinal cord and controls essential functions outside conscious control, such as breathing and blood flow. The pons affects activities such as sleeping, waking, and dreaming. The cerebellum  – 2 peach-size mounds of folded tissue located at the top of the brain stem, is the guru of skilled, coordinated movement (e.g., skateboarding or threading a needle).  Anyone who has great hand eye coordination can thank their cerebellum.